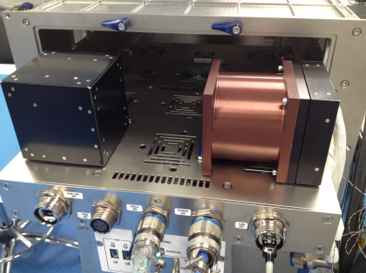 The two payloads, Hydra-2 and Hydra-3, represent the interdisciplinary principles of ISU: Hydra-2 is a science payload and Hydra-3 is an interactive art one. Both were designed and built by ISU staff and Masters of Space Studies (MSS) students. The two black cubes, 10 centimeters on each side, each with a mass of 1 kilogram, are the first payloads to fly to the ISS with the new International Commercial Experiments Cubes (ICE Cubes) Service from Space Applications Services. Once delivered to the ISS by the SpaceX Falcon 9 rocket and Dragon capsule, they will be installed in the ICE Cubes facility in the European Space Agency’s Columbus ISS module.

Hydra-2/MMARS2, continues the investigation of methane-producing microorganisms (methanogens) in space that was initiated by the MMARS1 (Microbial Methane Associated Research Strasbourg – 1) payload that flew to the ISS in 2017 and continues its distinctive cooperation model. This combines ISU knowledge of the space environment, methanogen expertise from the University of Strasbourg/French National Centre for Scientific Research and the University of New South Wales in Australia and the financial support of the Eurometropole of Strasbourg and the French insurance company Groupama (Groupe des Assurances Mutuelles Agricoles). Hydra-2/MMARS2 carries the methanogens in experimental modules manufactured by Airbus Defence and Space, Friedrichshafen integrated in an-ISU designed and manufactured CubeLab and also carries a DOSIS radiation-measuring device from the German space agency, DLR.

Hydra-3/Pulse, also housed in an ISU CubeLab, is an artistic project that will bring together members of the public on Earth with the payload on the ISS to create an interactive art piece that will be activated during performances on the ground. At these, participants’ pulse and oxygenation levels will be measured and transmitted to Pulse to activate a specially-designed ‘microgravity kaleidoscope’ and lighting panel. Images from the kaleidoscope will be transmitted back to the ground and projected for the audience, so closing the Earth-space loop. On the outside of the kaleidoscope cylinder is a specially-written poem which reflects the themes of the artwork and which will also be transmitted back to Earth. Also included in the Pulse payload is RUSH, a technology demonstration payload for radiation tolerant electronics from Ma cquarie University in Australia. Pulse is the work of Mexican artist and ISU alumnus Nahum, while the poem was written by ISU Hydra Project Coordinator Prof Chris Welch.

In November, Hydra-2 and Hydra-3 will be joined by another ISU payload, Hydra-1/Plant-Growth Experiment. After operations are complete, all three payloads will return to Earth with the SpaceX CRS-16 mission in December 2018 and then be returned to ISU for analysis.

“The Hydra payloads demonstrate ISU’s international, intercultural and interdisciplinary ethos at its best. They address both scientific and artistic concerns related to space. They are designed and built by ISU staff and students from many countries, partnered with colleagues from ISU’s global network. They are the first payloads to fly to the International Space Station with the new commercial ICE Cubes Service. Taken together, these clearly demonstrate the changing dynamic of a space sector in which ISU is proud to be a significant actor.”